And so the day began - in the Brand new wargames room, oops did I say that? The family multipurpose room (It's alright wifey won't be reading this.....) 1750 points Late war FOW

Scott arrived with his Panzer Lehr Infantry Company (from Atlantik Wall) and against them - Bryan's Welsh Guards (AKA: Hells Highway) - We also used the Games Workshop Battle board. I had intended using US Para's but alas - finishing the room was more important than painting the toys!

We rolled Caludron - Scott defending with his Infantry Company against the Mechanised British Force.

Choosing which side of the battlefield was a conundrum but finally the woody side of the hill was chosen and two objectives were placed as far away from the German reinforcement arrival point as possible. (Was this the wisest ploy? I'm sure the experienced FOW gamers will know!) The Germans attached their HMG platoon to their two rifle platoons and started on table with 2 Rifle Platoons, a Heavy Artillery Battery (proxied by 105's) and some PAK 40's on Immediate Ambush, all firmly dug in covering the objectives .


Jammy is the word I think we would describe the British deployment as - rolling and being able to deploy 2 Infantry Platoons, and an HMG Platoon all together and able to advance through the woods to the hilltop objective. The 25pdrs deployed with their backs to a hedge line in the lee of the hill.

Turn 1, the Germans tried to range their artillery in on the Brits on the hill but failed and everywhere else they held fast in their dugouts. The RAF arrived with two Typhoons pinning the rifle platoon on the hill and the PAK 40's and destroying an HMG team all after ranging in (4+ required). 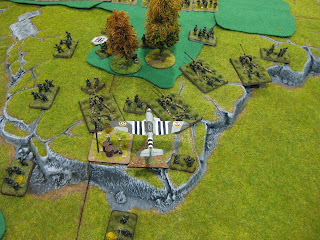 The Brits quickly advanced into the woods but decided against assaulting the pinned Germans instead opting for a little whittling before leaping to the assault. Although there was a hail of gunfire from the advancing troops the Germans were too well dug in and took no casualties. 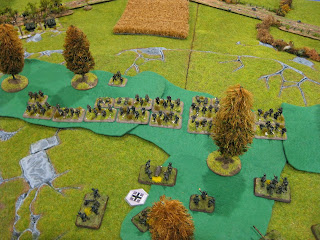 Rolling a 6, yes another piece of Jam on turn one, allowed the The Welsh Guards Recce Tanks to arrive on the other flank (The idea was to keep Jerry honest, so he couldn't switch all his troops to the hill) and destroyed 2 dug in guns with 2 shots (again the jam factor - two 6 sixes, 2 failed saving throws and 2 successful firepower tests). 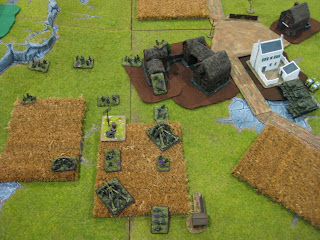 Turn two began with the German commander vacillating! Do I attack and potentially expose myself or hold fast but let the Brits dictate the attack and potentially swamp me? Opting for valour the Germans commander decide to open fire on the Brits advancing through the trees in an effort to break up the attack - the well prepared Germans accurate gunfire taking out two British Squads. 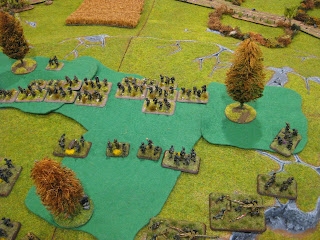 Of concern on the other flank is the appearance of the British Recce Tanks, SO the Germans turn their PAK's on the British Tanks, although they have less time and are able to put out less rounds they manage to score a hit on the the Big British Gun tank (Challenger) and brew it up. Meanwhile the infantry and German Heavy artillery stay dug in and decide not to expose themselves to the British tanks gunfire. 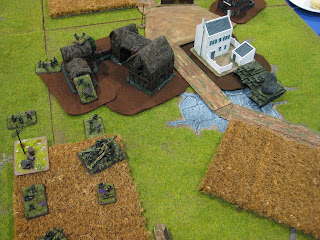 British Turn two, and more reinforcements for the British in the guise of the 2nd Household Cavalry! The two Damilers and Dingo advance up the road and put down a withering barrage of machine gun fire, but again fail to do a lot!!! 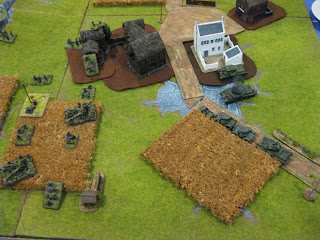 Meanwhile on the Hill objective the British, gather themselves for the assault, again scoring no kills in the advancing fire. However the 25pdrs do manage to pin the German platoon and anti-tank guns making an the prospect of an assault more promising. 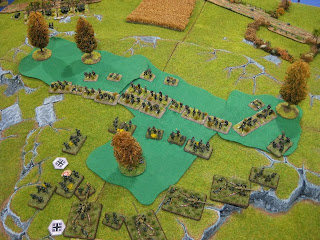 The Brits decide to throw caution to the wind, and launch themselves at the defending Germans, however the defensive fire is to accurate and their first assault is thrown off, the Germans scoring 6 hits and the Jammy Englander saving every one!!! 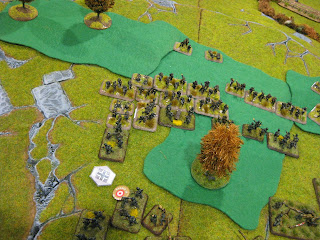 The Second British Platoon follows the first to the attack, through the slackening defensive fire and clear the Germans from their initial positions - however casualties are high and only one squad and the 2 inch mortar remain! 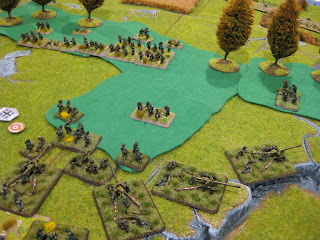 Again the British roll well on their reserves roll and their mortar team arrives, increasing the pressure on the field objective. And Mrs Brit appears with some home baking! (Bickies off the the right) 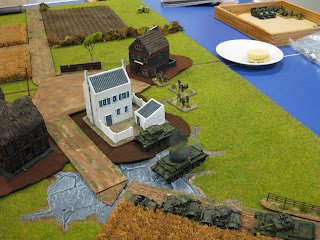 German turn 3, And The German platoon on the hill is reduced to below half strength. Unfortunately they fail their platoon Morale, will the their CO step in and try and save the day? Well sort of, he tries but they are only encouraged by their unwillingness to stick around so he decides to off it with them (Failed CO roll). The PAK 40's are left solis to hold the objective. 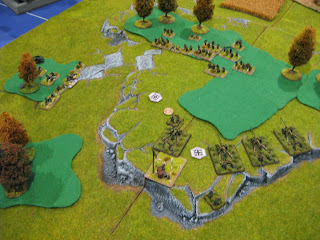 British turn 3. On the hill, the depleted British platoon fail their morale and retreat from the fight, while the 25pdrs keep the Germans pinned.

The remaining Brits launch an attack on the recently vacated German positions - will they take it or will they be repulsed???? The manage to push the PAK 40's back and destroy one of the guns but are unable to take the objective - this turn!! 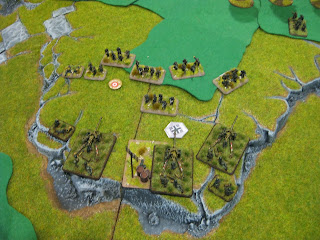 German turn 4 and The German Armour arrives behind the 25pdrs, hoping to take them out, they manage to destroy one 25pdr, pin them and move to assault. However discussion ensued about the 25pdrs being on turntables and a look at the rules suggested they were able to defensive fire (which we later checked on the FOW forums and discovered we played correctly), However the accurate British gunners halt the German PzIV attack taking out 2 tanks 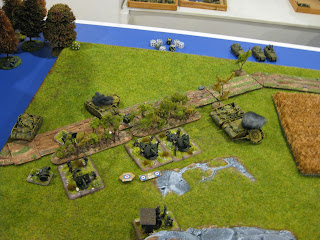 Biritsh turn 4 and the The RAF put in another appearance and destroy another HMG team, this time on the field objective and then Jammy as ever, while the German gunners cower in their holes it is not enough to save them as the 2 remaining British tanks take out another Gun. 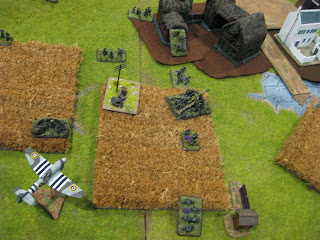 On the hilltop objective The Welsh Guards assault again, the Germans score 4 hits but are just 1 shy of repulsing the attack, with a hearty Hoo-Rah the Welsh capture or destroy the remaining PAK 40's and capture the objective. More British reserves arrive - this time the 17pdrs and immediately go into action behind the German tanks - but fail to score any hits. 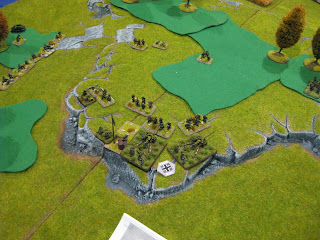 German turn 5 and the German recce arrives behind the British 17 pdrs and in a hail of well placed gunfire completely decimate them. The British play rues his reserve deployment looking to play the edges better next time. 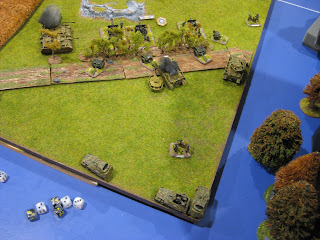 At the Start of British turn 5 the Brits hold an uncontested objective and snatch the win. The Brits starting with 9 platoons reduce the Germans points by one, the Final score a 5-2 victory to the Brits.

Posted by Scottswargaming at 11:48 9 comments:

At the weekend I finished off my first of two packs of German Begleit Tank Escorts, or Tank-riders to go with my StuGs;

The pack comes with sufficient foot figures to represent a short squad of dismounted troops. 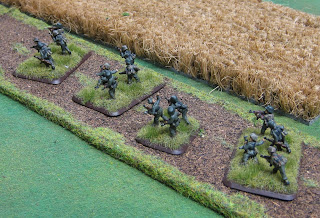 Even if not used as the 'Begleit' troops, they would be perfect as Assault rifle armed scouts.. 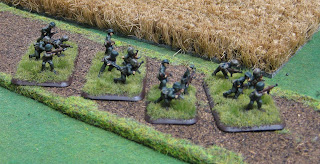 And then obviously the tank rider models themselves... 12 single figures in the packs give me enough for 4 groups of three figures, sufficient to go on 4 tanks. I didn't want to glue them to the tanks permanently as the StuGs wouldn't always get used with tank riders... so I decided to base up the figures on a small piece of plasticard which was painted to match the colour of the StuGs camo 'dunkelgelb' 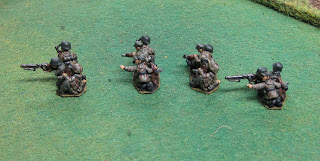 This little 'base', easily sits on the rear deck of the StuG, or StuH... blu-tac can hold in place temporarily.

And both together, foot troops and Begliet Escorts working together...

I believe the Germans learned this tactic from the Soviets who became renowned for having their infantry clinging frantically to the backs of their tanks as they roared towards to German lines...

I'll have to try them out in a game sometime. I hope they will fair better than their halftrack bourne counterparts.. a StuG is a far bigger piece of metal, than the thin armoured hulls of the SdKfz halftracks...!

Will this be the new wonder weapon of my forces, ... or will my 'tactical finesse' doom them to obscurity after their first outing... time will tell ;-)
Posted by Scottswargaming at 23:54 13 comments:


The Kapiti FoW Gamers club was set up to lodge a formal presence of Flames of War players in the Kapiti region of New Zealand.
We are an informal group of local players, who get together for games, by mutual arrangement, normally at each others houses as we all have games-rooms or dedicated gaming space.
We play a range of games, not only FoW, also Skirmish games like Lord of the Rings, Legends of the High Seas, SAGA and Empire of the Dead, and other larger Wargames such as Black Powder, Hail Caesar, DBA/M and have played Warhammer Ancients and Warmaster in the past, and boardgames such as Bloodbowl.